In recent weeks, Afghanistan has become a tender spot for the whole world. The Taliban’s new and newly offensive rise to power is a novel situation for the international community, and every international player wants to know how to position itself in this new pattern of dynamic, bewildering forces.

What is the situation now?

The de jure regime of Afghanistan is that of President Ashraf Ghani (pro-Western, his position strongly contested in the most recent elections). But he is no longer actually present on the ground. The de facto regime is imposed by Taliban followers of Pashtunwali.

Pashtunwali is a pre-Islamic code of conduct followed by the Pashto tribes in various regions of Afghanistan. It is strongly influenced by Wahhabism to the point that it can be confused with it, but if the two beliefs come into conflict, Pashtunwali followers would regard their code as having a higher moral value than Islam.

Taliban is a generic term that refers to a multitude of tribes, including among the Pashto community, tribes that only collaborate in case of external invasion, otherwise being in conflict with each other. The Taliban are organized into a tribal society, highly hierarchical and made up of clans, tribes and sub-tribes. The organizational structure of the Taliban community is shaped by an archaic pattern based on ethnic, religious and political grounds.

Will Afghanistan become a nest of terrorism?

Against the background of the Taliban’s takeover of political power in Afghanistan, the question naturally arises as to whether Afghanistan could become a space that will allow the development of extremist terrorism. The answer to this question must be analysed from several points of view.

Terrorists: In whose eyes?

First of all, when we talk about a terrorist threat, we should keep in mind this reflects the perspective of a particular set of political actors or political entities. We must not lose sight of the fact that terrorism is, above all, a legal or political construct that can have different shades for different entities. Thus, the Taliban movement can represent a potential coagulation of a terrorist threat to the West while, at the same time, can be interpreted as key players in the struggle for national liberation by other political actors, such as Pakistan.

The Taliban are not a homogeneous entity

Given the tribal structure of the Taliban, we should know that some factions that make up the group are categorized in many states as terrorist groups, while other factions of the Taliban group are considered to be a political movement with valid claims of political representation at the level of the Afghan state. In this context, we can easily fall into the trap of generalization by considering the Taliban group as an ethnically and politically homogeneous entity, but such an assessment would be simplistic and wrong.

For example, while the supreme leader of the Taliban movement, Hibatullah Akhundzada, may be accepted as the leader of Afghanistan and is not currently on any list of international terrorists, other groups that make up the wider Taliban movement are in a different situation.

The Haqqani Network, one of the most well-known factions of the Taliban group and which will most likely have representatives who will hold ministerial positions in the future Taliban-led regime, has long been designated a terrorist organization, including by Pakistan, who supported the Taliban during their time in exile, as well as before. In fact, most Western states, the US, and the UN consider the Haqqani network to be a terrorist organization.

In this context, the question arises, once again, as to whether we are dealing with the emergence of a terrorist threat against this new political backdrop. The answer to this question is “it depends.” In the specific case of Afghanistan, if evidence of violence committed by members of the Haqqani network against Afghan citizens were to surface, we could be talking about a form of state terrorism. On the other hand, the Haqqani network, as well as the entire Taliban movement, have nationalist or at most regional political goals. Their actions will most likely not reach the territory of any Western state. It remains to be seen how the international community will choose to catalogue the actions, but also the objectives of the future regime in Kabul. 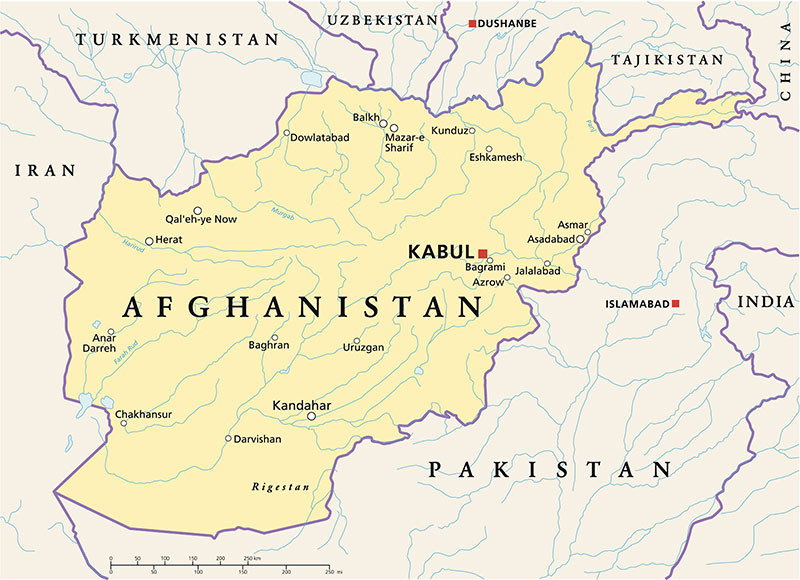 The twin bomb attack near Kabul airport Thursday afternoon gave rise to the suspicion that Afghanistan is becoming an international terrorist exporter.

The Taliban’s relationship with other extremist groups

A third dimension of the answer to the above question relies on the closeness between the Taliban, the other groups that make up the Taliban movement—categorized as terrorist organizations (Tehrik-i-Taliban Pakistan, Haqqani network)—and Al-Qaeda. It is important to note here that Al-Qaeda has historically had a close relationship with the Taliban.

Although the ideological origins of Al-Qaeda are older than those of the Taliban, many of the central figures of Al-Qaeda have completed their ideological training by fighting alongside the Taliban. A notable example is Osama bin Laden, who was a volunteer fighter in the actions of the Haqqani network when it was patronized by the founder of the Jalaluddin Haqqani movement, despite being born and predominantly active in Saudi Arabia. Al-Qaeda-Taliban ties have also been strengthened during the two-decade struggle against the US-led international alliance.

It is also worth noting that the AQAP Movement (Al-Qaeda in the Arabian Peninsula) welcomed the Taliban’s recapture of Afghan territory. AQAP’s gesture is representative of the satisfaction that most extremist movements of Sunni origin feel after the Taliban’s occupation of Kabul and thus the takeover of political power in Afghanistan. From this perspective, we can expect a resurgence of al-Qaeda’s terrorist activities, at least in theory. However, we still need to see what Afghanistan’s political direction will be in the next period of time.

Given the Taliban’s desire for international recognition, but also the approval of the provisions of the 2020 Doha Agreement by which the Taliban pledged not to allow Afghan territory to become a base for extremist movements, we can still hope that their recent victory will not mean the revival of Al-Qaeda. But Al-Qaeda is not the only danger in the region.

I referred above to the satisfaction that the Sunni (Wahhabi) extremist movements are feeling after the Taliban’s victory. A notable exception to this situation is the case of ISIS (Islamic State group).

Although they have a common ideological basis, given the power of the Wahhabi ideology over both Sunnis and members of the Islamic State, the two movements have often been on opposite positions in terms of political goals. ISIS considers the Taliban to be apostates (rebels in the context of Islam) because they were willing to negotiate with the Americans, ISIS’s ultimate enemy. In Islam, apostasy is a serious offense, which is not infrequently punishable by death. Takfir (excommunication) is the term that refers to the set of punishments that those loyal to Islam can impose on those accused of apostasy. The Taliban even fought against ISIS in Afghanistan, including during the occupation of Coalition armies in recent years. In these circumstances, we will not witness a voluntary transformation of Afghan territory into a training ground for ISIS militants in the near future. On the contrary, there is a good chance that the Taliban will be more of an ally of the West against ISIS if the security situation in the region so requires.

The Islamic Movement of Uzbekistan

Finally, it is worth focusing on another extremist organization (designated as a terrorist organization in many countries of the world). It is a lesser-known organization, but one which still has the potential to become a destabilizing factor on the Asian continent: the Islamic Movement of Uzbekistan (IMU). Although, both in the past before its incorporation into the Islamic State movement, and now, in its reinvigorated form, the organization has asserted its support for the Taliban movement, IMU is still a distinct extremist organization with nationalist goals (establishing an Islamic state in Uzbekistan, in accordance with Sharia law), but also regional and even international goals. It has frequently expressed support for Al-Qaeda attacks against the United States, and allegiance to its anti-Western agenda. The peculiarity of this movement consists in the coagulation of extremist elements of Islamic nature, especially from the Central Asian states (Uzbekistan, Tajikistan, Turkmenistan, Kyrgyzstan).

This composition is of particular concern to China, whose Xinjiang province, home to the Uyghurs, a Turkish Muslim people with its own aspirations for independence, shares a common border with Afghanistan. The rise of the Islamic Movement in Uzbekistan, in the current context of the Taliban’s takeover of political power in Afghanistan, will be a matter of concern for China, as this extremist movement will have the potential to encourage and fuel pro-independence demonstrations by Uyghurs, which are known for their violence.

In conclusion, it is difficult to predict whether and to what extent regime change in Kabul will have the potential to turn Afghanistan into a hotbed for terrorist movements with origins in Wahhabi Islam. We must also keep in mind that we are not yet fully aware of the details of the 2020 Doha Agreement between the Donald Trump administration and the Taliban leadership. We have the written agreement between the two parties, but we do not have access to the informal discussions and negotiations between them. It is also too early to assess how far the Taliban will be willing to go to secure international recognition. But, certainly, the period that will follow the wave of escalating instability in the region will bring us a clearer picture of this territory—a land that has been called “the graveyard of empires”.

Raisa Dobrescu holds a PhD in public international law, with Titu Maiorescu University of Bucharest awarding her the title for a paper on international terrorism and the measures of the international criminal court against terrorism. After more than five years of experience in the field of diplomacy and international relations, working in international organizations such as the UN, Raisa Dobrescu currently works in the Romanian Ministry of National Defence.
A version of this article originally appeared on ST Network and was reposted with their permission

ABBA, 40 years on: A return with conflict feelings

Super dads don’t save themselves

Sports betting: From Entertainment to Addiction